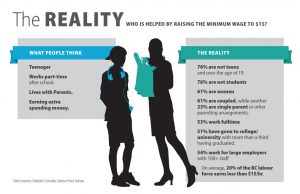 “Regular, predictable increases to our minimum wage are one important way we can make life more affordable for people,” said Premier Horgan.

“For too long, the low

est-paid workers in our province have been left to fall behind, with their wages frozen for a decade at a time. That’s not fair and it’s not right. Like all British Columbi

ans, our lowest-paid workers deserve a fair shake and a fair wage.”

The next wage increase, on June 1, 2018, will benefit 94,000 minimum-wage earners, while increasing the minimum wage to over $15 an hour on June 1, 2021, will benefit 400,000 workers throughout the province. The commission’s scaled approach will allow businesses and employers to plan for predictable and stable increases to wages over time.

“Freezing the minimum wage for 10 years hurt people, and then increasing it in a sporadic and unplanned way hurt businesses. We are taking a balanced approach that will work better for everyone, by bringing in measured and predictable increases over time,” said Harry Bains, Minister of Labour. “I’m thankful for the incredible work done by the members of the Fair Wages Commission, who worked together to come up with a fair path forward.”

The Fair Wages Commission was established in October 2017 as an arm’s-length government body to help guide public engagement on how B.C. should achieve a $15-an-hour minimum wage, and also the timeline for implementation. In a report delivered to government in January 2018, following public consultations and receipt of research and submissions, the commission recommended four minimum wage increases over four years.

The Fair Wages Commission recommended the following schedule of increases:

Depending on economic conditions, the commission recommended that government consider of an additional hourly increase of up to $.20, to $15.40 an hour in 2021.

The Fair Wages Commission report with recommendations can be found here: https://engage.gov.bc.ca/app/uploads/sites/237/2018/02/Report-1_BC-Fair-Wages-Commission_Jan-2018.pdf

Information on B.C.’s minimum wage can be found online: www.gov.bc.ca/minimumwage

A backgrounder can be found here: https://news.gov.bc.ca/files/Backgrounder_MinimumWage.pdf